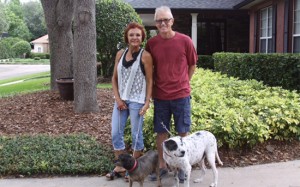 It is common knowledge that Alzheimer’s robs people of their ability to remember, but other truths about the disease remain unknown. This June, we are debunking harmful misconceptions that keep people from seeking a diagnosis and that reduce access to needed resources and support services. Uncover the truths and take action to help end this disease.

Julia Balson, a slight, red-haired woman with a big smile, English accent and twinkling eyes, now knows that Alzheimer’s disease affects 47 million people worldwide, a growing percentage of which are younger than the age of 65 . She knows this ugly statistic because her beloved husband, Mike was diagnosed at age 58. “But isn’t Alzheimer’s an “older person’s” disease,” I ask her? I know this is what a lot of people think, so I put the question out there. She sighs heavily and tries to steady her vital, yet sad voice, “Unfortunately not,” she finally says.

Mike and Julia Balson, along with thousands of others living with younger-onset Alzheimer’s disease need the world to know that while theirs is a true and lasting love story, the reality of Alzheimer’s isn’t what’s depicted in The Notebook. This disease doesn’t just affect “old people” or the ability to remember at the end of one’s life.

Married for more than 47 years, the Balsons are world travelers who have adapted to many global cultures during their life together. Like many couples, they’ve had children, challenges, joys and regrets. But one thing they never planned for, or ever thought about, was the possibility of Alzheimer’s wreaking havoc on their family.

Mike was a strong, elite athlete who played professional soccer on the international circuit for more than a decade. He played on big teams in the U.K. and, at one point in his playing career, moved his family to South Africa to join a professional team there. The family had to eventually leave due to the overwhelming violence from the Apartheid riots in the area. So, Mike and Julia, no strangers to adversity, felt they could take on any problem that came their way. When Mike started showing signs of mental “fogginess,” they both dismissed it (or denied it, as Julia tells me later) until the symptoms became so apparent one day when Mike filed his paycheck in one of Julia’s cookbooks.

Despite such a difficult diagnosis, they both maintain sunny dispositions and a strong desire to help others in similar situations. I recently had the privilege of speaking with Julia and Mike about their journey with Mike’s diagnosis. Both of them were quick to offer advice about love, acceptance and living with Alzheimer’s disease.

Tell me a little bit about being married for 47 years. How has your partnership helped you face such a devastating disease?

Julia: Big factors for us are hard work, accepting the ups and downs, our faith in God, and our hope for advances in research. I think it’s also important to love and respect each other and try to ignore each other’s faults. No one is perfect! We look for ways to serve each other, and put each other’s needs above our own. We definitely try to encourage each other; and we make it a point to laugh a lot. Now we hold the motto that unless a situation is life and death at the moment, we don’t worry about it.

Mike: Never give up; it’s so easy to give up when you’re faced with this kind of situation but you just can’t.

Julia, when did you first realize there was something “off” with Mike? How did you respond to this?

Julia: Two things stand out. I found a paycheck in a cookbook. This was odd because Mike had always been so on-top of everything. Also, his driving abilities seemed to be declining. Honestly, I panicked at first and then I was definitely in denial. We ended up getting help through the Alzheimer’s Association much later on; looking back, we should’ve reached out earlier, but I was scared and felt helpless and isolated.

Mike, what about you? When did you first start noticing things? What did you notice?

Mike: Things just weren’t right, but I couldn’t figure out exactly what wasn’t right. And, I don’t think I could accept it. I kept asking for directions to go to work), and it once took 20 minutes to do a bank deposit which was unusual because I always had a keen mind.

What did you do when you noticed these behaviors? Can you take us through the time you began to notice problems, through getting the diagnosis?

Julia: We didn’t do anything at first. Eventually, we realized we needed to get help because Mike was struggling with day-to-day tasks. Initially, Mike was diagnosed with Mild Cognitive Impairment (MCI). We later got the diagnosis of Alzheimer’s disease.

What has been the biggest change to your relationship since the diagnosis? What do you find to be the biggest issues you have to tackle on a daily basis?

Julia: I’d say our biggest change has been the role reversal, because I now have to take care of everything that Mike used to do, like all the driving, the financing and household stuff. I also have to help Mike choose clothes (he would sometimes dress awkwardly with clothes in the wrong order, or not seasonally appropriate), make sure he takes his medications properly and make sure he is bathing correctly. I know it upsets Mike that he isn’t able to take care of me like he used to, but I am a pretty strong person and can take care of myself, so I don’t mind that as much.

Mike: The lack of driving ability is upsetting and it’s a struggle to remember day-to-day details. It is also upsetting that I can’t take care of Julia like I used to. I have a problem remembering to eat – Julia will leave food prepared for me and I’ll forget about it completely. Also, I’m trying to work on interacting with others.

What helpful adjustments have you made that you can share with other couples living with Alzheimer’s?

Julia: A key thing for us is to write everything down – appointments, instructions, reminders, etc. Writing everything down really helps Mike remember to do things. When I was in denial, I didn’t write everything down and that would get frustrating for both of us. Now we keep a calendar on hand with everything written down. I also joined an Alzheimer’s Association support group; I’ve found that spending time with others on the same journey is a great comfort. I take Mike to the Memories in the Making art classes; it’s something he’d never done before but really now enjoys. Another big thing was to accept the changes, to recognize that there is life after the diagnosis even though it’s never going to be the same as it was.

Working with the Alzheimer’s Association, what do you regard to be the most beneficial support services they provide? What would you suggest to a couple who is just receiving a diagnosis?

Mike: Their monthly couples support group has been our biggest lifeline. When all this started, Julia was constantly stressed and ill from trying to handle everything on her own.

Julia: There is a church service the first Wednesday of every month that has been very important and beneficial for us. To anyone who is just receiving a diagnosis – don’t panic. There are so many resources offered by the Alzheimer’s Association. They can get help by joining a support group; the staff are kind and wonderful, and no one should go through it alone. Also, remember that there is life after an Alzheimer’s diagnosis – it’s different, but there is life.

If you could tell people one thing about life after diagnosis, what would it be?

Julia: You should appreciate every day that you have together as a blessing from God and take life one day at a time. No matter how much you love each other – or the person you are caring for – you still get frustrated sometimes. Take time to sit and say “let’s regroup” when you are frustrated or upset with each other.

Mike: I would say to remember that caregivers must take time for themselves because life as a caregiver can get challenging and overwhelming.

The Balsons hope that sharing their story will encourage others who may be dealing with similar struggles and fears. Though Alzheimer’s is more than just losing memories, Mike and Julia will be the first to remind you that it doesn’t have to mean losing love.

Mike and Julia will be going purple this month in honor of Alzheimer’s & Brain Awareness Month. You can join them and learn more by visiting alz.org/June.