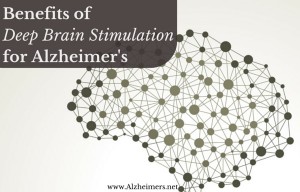 Deep brain stimulation is a neurosurgical procedure that has been shown to be an effective form of treatment for several disorders, including Parkinson’s disease. A new study found that deep brain stimulation may also be helpful when it comes to treating Alzheimer’s disease and related forms of dementia

Learn more about the treatment method and the groundbreaking new study on brain stimulation.

Controlled by a pacemaker-like device under the skin, DBS has been beneficial for a number of disorders including Parkinson’s disease, essential tremor, chronic pain, major depression and obsessive-compulsive disorder.

It is important to note that there are potential serious neuropsychiatric side-effects from deep brain stimulation, which range from apathy to hallucinations and compulsive gambling to hyper-sexuality and depression. These side effects are usually temporary and potentially reversible. Electrodes may also become displaced during surgery causing personality changes, but this can also be fixed and identified through a CT scan.

The latest study to look at the effects of DBS on dementia found that it may be a therapeutic target for dementia and related disorders.

The study, conducted at the Nanyang Technological University in Singapore, implanted DBS electrodes in rats. The electrodes were programmed to target the ventromedial prefrontal cortex, which is a part of the brain responsible for a higher level of cognitive function. Researchers noticed a significant improvement in the ability of the rats to perform memory tasks after constant stimulation of the ventromedial prefrontal cortex. They also saw new neurons being formed in the brain, compared to the control group.

This groundbreaking result means that new brain cells can be created through DPS, which can improve memory retention. The increase in neurons may also reduce anxiety and depression, commonly felt by people living with varying forms of dementia.

“The findings from the research clearly show the potential of enhancing the growth of brain cells using deep brain stimulation. Around 60% of patients do not respond to regular anti-depressant treatments and our research opens new doors for more effective treatment options.”

Dr Lim Lee Wei, associate professor at Sunway University Mayalsia and researcher added to the enthusiasm of his colleague stating:

“Memory loss in older people is not only a serious and widespread problem, but signifies a key symptom of dementia. At least one in 10 people aged 60 and above in Singapore suffer from dementia and this breakthrough could pave the way towards improved treatments for patients.”