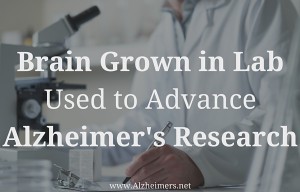 Two scientists have developed a human brain generated from skin cells that may be used to make great advances in neuroscience research. Learn more about the development of the brain and what it means for the future of Alzheimer’s disease.

A miniature brain the size of a pencil eraser may help researchers fighting neurodegenerative diseases, like Alzheimer’s.

Rene Anand, professor biological chemistry and pharmacology at Ohio State University and his colleague Susan McKay developed the organoid from adult human skin cells. It is about the size of a 5-month-old fetus but contains 99% of all genes present in a fetal brain. Researchers hope that if the brain continues to grow, the missing 1% of genes may fill in.

Their development method is proprietary and unable to be described in great detail, but the scientists have said that their brain includes a neural system, a spinal cord, all major regions of the brain and various cell types and retina. It does not, however, include a vascular system.

Anand said of the brain, “It not only looks like the developing brain, its diverse cell types express nearly all genes like a brain.” He went on to say:

“We’ve struggled for a long time trying to solve complex brain disease problems that cause tremendous pain and suffering. The power of this brain model bodes very well for human health because it gives us better and more relevant options to test and develop therapeutics.”

While the brain is missing 1% of the genes of a human brain and lacks a vascular system, there is enough of it present to make drastic leaps in neuroscience research.

A brain grown from a lab could allow experimental drugs to be tested on it, instead of on mice or other lab rodents giving a more accurate picture of the drugs effects on the human body. Additionally, because of how the brain was grown from human skin cells, it’s a more ethical way to conduct research.

Thus far, Anand and McKay have used their system to create different organoids modeling Parkinson’s disease, autism and Alzheimer’s. The research was presented at the 2015 Military Health System Research Symposium as a way to aid research into post traumatic stress disorder and traumatic brain injuries that plague the military.

What do you think of this latest development in Alzheimer’s research? Can a lab grown brain help find a cure for Alzheimer’s? Share your thoughts in the comments below.

How to Survive Caring for Aging Parents
Scroll to top