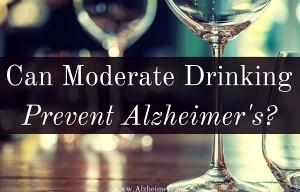 As researchers look for a way to prevent Alzheimer’s disease and related dementias, studies are pointing towards the importance of diet and lifestyle choices in brain health. Two studies show that moderate alcohol consumption (meaning one to two drinks per day) may be beneficial for the brain.

The MIND Diet and Alzheimer’s

The MIND diet, which combines principles of a Mediterranean diet and the Dietary Approaches to Stop Hypertension (DASH) diet, has been shown to reduce the risk of Alzheimer’s by over 50%.

Key components of the MIND diet consist of:

A recent study from the Rush University Medical Center in Chicago put this theory to the test.

The study observed 960 people who did not have dementia over 4.7 years. The average age of the participants was 81.4 years old. Researchers tracked cognitive changes over the course of 4.7 years and found that those who drank a glass of wine daily were more likely to delay cognitive decline. Cognitive changes researchers tracked included episodic memory, working memory, semantic memory, visuospatial ability and perceptual speed.

The study was recently published in the Journal of the Alzheimer’s Association.

In another study from Loyola University Chicago’s Stritch School of Medicine, researchers found that moderate alcohol consumption may have brain boosting benefits. In the largest analysis to date, researches studied the data from 143 studies including 365,000 participants around the world. Through their analysis they found that those who consumed alcohol moderately were 23% less likely to develop Alzheimer’s disease or a related dementia. However, heavy drinkers (3-5 drinks per day) were more likely to develop dementia.

Researchers caution that non-drinkers should not begin drinking to delay cognitive decline and that the key to alcohol consumption is moderation. For women, moderation is defined as no more than one drink a day, and as one to two drinks a day for men. Study author Michael A. Collins, PhD, said:

“This study is not the final word, but it does provide the most complete picture out there.”

The study was published in the journal Neuropsychiatric Disease and Treatment.