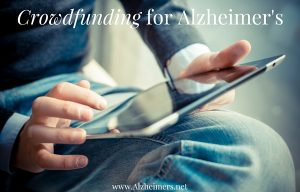 As the Alzheimer’s epidemic looms, funding for research to fight the disease remains hard to come by. The lack of research funds has lead some researchers to turn to alternative means to fund their work, including using crowdfunding sites.

Learn more about how researchers are using crowdfunding sites and why some researchers caution against it.

It is well known that Alzheimer’s research is underfunded and that the looming epidemic threatens not only emotional turmoil but financial devastation. As the global economies tighten and access to credit and funding for basic research is blocked, many researchers are finding their studies coming to a grinding halt, stopping the fight against Alzheimer’s in it’s tracks.

Researchers taking a more untraditional approach to fighting the disease find themselves at even more of a loss, lacking funding to put their ideas to the test. A recent editorial published in the Journal of Alzheimer’s Disease noted the difficulty in obtaining funding stating,

“The obstacle to progress – and to funding – is that outdated theories are held tenaciously by the protagonists, and they decry any alternatives.”

With a lack of funds, many researchers are seeking alternative methods to support their work, turning to crowdfunding and the general public to support efforts in the fight against Alzheimer’s.

One specific crowdfunding campaign, “Defying Dementia,” is asking for public funds to test their drug as a potential cure for dementia. The group has raised £52,000 towards their target of £165,000.

Run by a group of researchers from Lancaster University’s division of biomedicine and life sciences, the group has been able to carry out portions of their work, allowing them to continue advancing until more funds emerge. Dr. David Allsop, lead researcher on the team, said:

“We are really excited because we think that we are on to something that stands a chance of working, but without crowdfunding would have been stumped.”

Other researchers are more cautious in using crowdfunding for research efforts. Dr. Chris Watkins, head of translational research for the Medical Research Council acknowledges that crowdfunding may have a place in funding research but advises using caution stating, “To approach the public directly and to say ‘please fund this’ without questioning whether the individuals have enough knowledge to decide whether it is a good study is unethical.” He also worries that crowdfunding could be misused by researchers who have failed to gain financial backing from other sources based on credibility and quality issues.

He also says that sometimes the issue can be more than financial. “There is never enough money to spend on good research. But it’s not just a case of throwing money at it. Sometimes we do not yet have the tools to answer the questions and medical research takes a long time.”

What do you think about using crowdfunding to back Alzheimer’s and dementia studies? Share your thoughts with us in the comments below.

Watch: The How To’s on Pain Management
Scroll to top