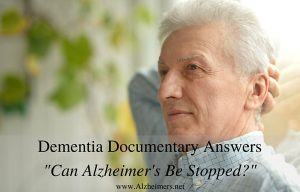 A new documentary that aired on PBS took a closer look at the fight against Alzheimer’s and followed researchers in efforts to stop the disease in its tracks.

Learn more about the documentary featuring global efforts to halt the devastation of Alzheimer’s disease.

Dementia Documentary: “Can Alzheimer’s Be Stopped?”

The Alzheimer’s epidemic is looming, waging a global and non-discriminatory war. More than 5 million Americans are currently living with the disease and someone develops the disease every 66 seconds in the United States. There is no cure and the drugs on the market have had limited success.

Alzheimer’s disease is now the sixth leading cause of death in the U.S.

A new documentary called, “Can Alzheimer’s Be Stopped?” aired on PBS on April 13, 2016, and presented the latest theories and trials that could lead to a cure for Alzheimer’s.

A Call to Action Against Alzheimer’s Disease

One featured study is led by Dr. Reisa Sperling, professor of neurology at Harvard Medical School and director of the Center for Alzheimer’s Research and Treatment at Brigham and Women’s Hospital in Boston. Sperling has seen the effects of Alzheimer’s first hand, watching her own father fight the disease. In the documentary, she speaks in depth about her clinical trial testing a drug that could potentially stop Alzheimer’s before it starts.

Her study calls for 1,000 participants. With nearly 500 already enrolled, Sperling is hopeful that other people will see the documentary and join the fight. She states, “The only way we’re going to get answers is if people join us in this fight.” She went on to say that while researchers are making some progress, the real answer will lie in a combination of biology and lifestyle choices, stating:

“It will be a combination of healthy lifestyle and biologically active agents that will tip the odds in our favor. I do think we’re making progress. I wish it could go faster. It’s incredibly sad for me that we couldn’t in time to help my dad, but I hope that my kids won’t have to go through what I and my mom did. I hope that people who watch the film get excited and motivated to join the fight.”

Learn more about the documentary on PBS.org.

Books for Children about Alzheimer’s and Dementia
Scroll to top