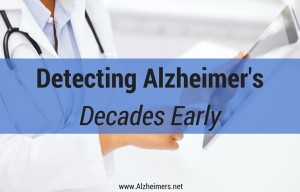 Doctors and scientists stress the early detection of Alzheimer’s disease and related dementias to increase treatment options and slow its progression. Now, new technologies are detecting Alzheimer’s earlier than ever before.

Learn more about why this is important and about the technologies that are changing the future of Alzheimer’s research.

The Importance of Early Detection of Alzheimer’s

According to the Alzheimer’s Association, early detection of cognitive impairment offers a wide range of benefits for people with dementia, their caregivers, their families and their team of doctors. These benefits include:

Many people shy away from an early diagnosis because Alzheimer’s and dementia are not treatable.

While understandable, early detection can help mitigate stress, caregiver burden and feelings of guilt, and allow families time to process the diagnosis and plan.

Now, due to the latest technology, Alzheimer’s and related forms of dementia are being diagnosed earlier than ever.

Physician-scientist and faculty chair for the Medicine and Exponential Medicine program at Singularity University Dr. Daniel Kraft, presented on early detection technology at the Exponential Finance conference in New York City, calling for new tools to keep up with what he called an “avalanche of data.” He touched on a number of new technologies including new brain scans, blood tests and a brand new eye test.

New brain scans are enabling doctors to see inside the brains of people at high risk for Alzheimer’s before clinical symptoms develop. One type of scan uses MRI technology to find beta amyloid, thought to cause Alzheimer’s, and has been shown to detect Alzheimer’s with 90% accuracy before symptoms occur.

Kraft also referenced a new eye test to predict dementia. While the testing is still in early stages, researchers at Duke University found that the difference sizes of blood vessels in the eye may actually predict dementia before symptoms, allowing people with the disease to receive care  before irreversible brain damage occurs.

All of these advances are crucial to fighting Alzheimer’s. There is no cure for the disease, but researchers are hopeful that these critical developments will shed light on its pathology and create more treatment and prevention methods.

What do you think about the latest technology to detect Alzheimer’s? Is it helping in the fight against Alzheimer’s?  Share your thoughts with us in the comments below.