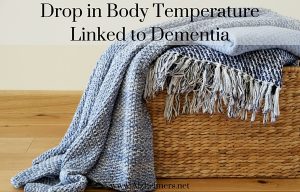 It is normal for people to experience a drop in body temperature with age, but a new study has found that drops in temperature can lead to more than just a chill. A study from Canada found that by increasing body temperature, they could slow the production of beta-amyloid and improve the memory in mice.

Learn more about this study and how the drop in body temperature was linked to dementia.

A research team from Université Laval in Canada conducted a study that concluded increasing body temperature could help halt the production of beta-amyloid and improve the memory in mice with dementia. Their study suggests that thermoregulation could also help humans with the disease.

“We know that the incidence of Alzheimer’s is low before age 65, but doubles every five to six years afterward. We also know that metabolism and body temperature decrease as people get older. We therefore tested the hypothesis that the changes in the body’s thermoregulation that occur with age amplify the main manifestations of Alzheimer’s and that a vicious circle can even set in because the disease expresses itself in certain areas of the brain involved in temperature regulation.”

Thermoregulation as Therapy for People with Dementia

Because the study produced such promising results in mice, researchers are looking into testing the effects of thermoregulation on people living with dementia.

“Our findings suggest that it is worth exploring the treatment of thermoregulation among seniors suffering from Alzheimer’s.”

“If our conclusions are confirmed, it would be a relatively easy therapeutic option to implement because body temperature can be increased through physical activity, diet, drugs or simply by increasing the ambient temperature,” he stated.

Have you seen a correlation between body temperature and symptoms of the disease? What do you think about thermoregulation being linked to dementia? Share your stories with us in the comments below.