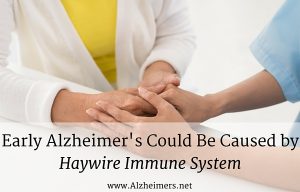 Learn more about the role of the immune system in early Alzheimer’s, and how it’s failure to operate properly could result in memory loss.

For the past few decades, researchers have focused Alzheimer’s research and drug trials on reducing or stopping the development of toxic beta amyloid plaques in the brain. But, with more than 99% of clinical trials for experimental Alzheimer’s drugs failing, some researchers are wondering if they have the wrong target.

While beta amyloid plaques are a hallmark characteristic of the disease, researchers have noticed there is no correlation between an increase in plaques and an increase in memory loss or lack of focus. This is why some researchers, including Beth Stevens of Boston Children’s Hospital, are looking for other targets in drug trials.

One such study, led by Stevens, took a closer look at another shared characteristic of Alzheimer’s – the marked loss of synapses in the brains of people with the disease. Synapses are connections between neurons and are key in the memory making process. Stevens has spent most of her career studying a normal immune response that essentially destroys unnecessary synapses as the brain matures through childhood and adolescence, making more important neuron connections stronger. In this normal process, a protein called C1q launches a series of reactions that eventually targets a synapse for destruction. When the synapse has been labeled for destruction, immune cells dispose of it.

How Early Alzheimer’s is Affected by a Haywire Immune System

Stevens believes that it is this same mechanism found in healthy brains that goes haywire in the brains of people with early Alzheimer’s, leading to poor neural connections and memory loss.

Her hypothesis is that this process somehow is launched in adult brains. “Instead of nicely whittling away, microglia are eating when they’re not supposed to,” she says.

To test this theory, researchers used two mice with Alzheimer’s who were producing an increased amount of beta amyloid proteins. Both mice also exhibited increased levels of C1q in brain tissue. When researchers gave the mice an antibody to stop the destruction of cells via microglia, synapse loss did not appear. Researchers are currently tracking the same mice to see if a drug that blocks C1q slows cognitive decline.

More research is being done to understand the relationship between the role of microglia and Alzheimer’s. Edward Ruthazer, neuroscientist at the Montreal Neurological Institute and Hospital in Canada says that a central role for microglia in the pathology of Alzheimer’s is “still on the controversial side” but also admits that “it’s difficult to argue with the strength of the study’s evidence.”