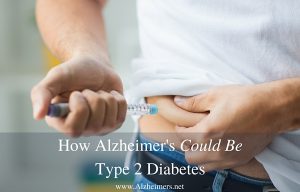 The link between Alzheimer’s disease and diabetes continues to grow stronger. A new study presented at the Society for Neuroscience shows that the disease may actually be the late stages of type 2 diabetes.

Learn more about how Alzheimer’s could be type 2 diabetes.

The Correlation Between Alzheimer’s and Type 2 Diabetes

A new study done by researchers at Albany University in New York, shows that Alzheimer’s may be the late stages of type 2 diabetes.

People who have type 2 diabetes produce extra insulin. That insulin can get into the brain, disrupting brain chemistry and leading toxic proteins that poison brain cells to form. The protein that forms in both Alzheimer’s patients and people with type 2 diabetes is the same protein.

“People who develop diabetes have to realize this is about more than controlling their weight or diet. It’s also the first step on the road to cognitive decline. At first they won’t be able to keep up with their kids playing games, but in 30 years’ time they may not even recognize them.”

In the past few years, the connection between the two diseases has grown stronger with each relevant study. People who develop type 2 diabetes often experience a sharp decline in cognitive function and almost 70% of them ultimately develop Alzheimer’s.

The study evaluated over 120 older adults with type 2 diabetes and 700 people without diabetes. Some did have dementia or Alzheimer’s while others had signs of mild cognitive impairment and others had no cognitive impairment. All participants underwent MRI scans and 50% gave cerebrospinal fluid samples so researchers could measure levels of beta-amyloid and tau, two proteins that make up the tangles commonly seen in the brains of people who have Alzheimer’s. They found that overall, people with type 2 diabetes showed more thinning the brain’s cortex and had higher levels of tau protein as evidenced by the spinal fluid which demonstrates an increased level of tangles in the brain.

Senior researcher Dr. Velandai Srikanth, geriatrician at Monash University in Melbourne, Australia believes that type 2 diabetes may cause brain abnormalities that can lead to neurodegenerative conditions, like Alzheimer’s. He also cautions that while the study shows a correlation, it does not prove causation. Other common factors among people with type 2 diabetes, like obesity, chronically high blood sugar levels or even degeneration in brain tissues may be at play.

The study has a larger implication in that controlling diabetes may be a way to fight the formation of plaques in the brain. However, for now, researchers do not fully understand why diabetes would increase tau buildup.

The results of the studies reinforce the idea that Alzheimer’s and diabetes are linked and plays an important role in our brain health.

New Insight Into the Alzheimer’s and Diabetes Connection

The link between Alzheimer’s and diabetes continues to grow stronger with a new paper by Professor Melissa Schilling, a strategy and innovation expert at the NYU Stern School of Business. The paper, recently published in The Journal of Alzheimer’s Disease, found that hyperinsulinemia, caused by early or undiagnosed diabetes, obesity or prediabetes is also found in nearly half of all people with Alzheimer’s. Schilling reviewed hundreds of published articles about the pathway between insulin and Alzheimer’s, leading her to a new understanding of the connections between the two disease. She said:

“What I’ve learned from my innovation research is that specialists can become trapped in the logic of their field, so new perspectives often come from outsiders. If we can raise awareness and get more people tested for hyperinsulinemia, especially those who have been diagnosed with or who are at risk for dementia, it could significantly lessen the incidence of Alzheimer’s disease and vascular dementia, as well as other diabetes-related health problems.”

Her findings could have major implications for Alzheimer’s and diabetes detection, including,

What You Can Do Now

While more research needs to be done to confirm the relationship between the two diseases we know that eating healthy can keep diabetes away, which may keep Alzheimer’s away. The study also showed that losing weight and exercising may keep the early stages of Alzheimer’s at bay.

The following lifestyle changes can keep you from developing type 2 diabetes:

Were you aware about the connection between Alzheimer’s and diabetes? Will you change your health for body and mind? Share your thoughts with us in the comments below.

A Long Ride on The Longest Day
Scroll to top