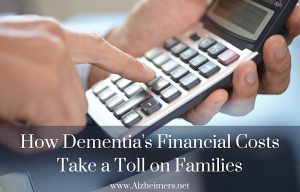 It’s no secret that Alzheimer’s disease and related forms of dementia bring emotional hardship to families and loved ones. But, the Alzheimer’s Association – who surveyed 3,500 contributors of care – found that dementia’s financial costs also take a toll on families, bringing an insufferable financial burden to many family members.

Take a closer look at the findings from the survey and learn how these findings may impact future financing options.

Vice President of Constituent Services for the Alzheimer’s Association, Beth Kallmyer, summed up the report stating:

“The cost of paying for care was putting people in a situation where they had to make really difficult choices around basic necessities – things like food, medical care, transportation.”

The survey was based on the responses of over 3,500 Americans who were somehow contributing to the care of someone with Alzheimer’s or a related dementia. Key findings of the report included:

Kallmyer says the survey was eye-opening, showing how unprepared people are to not only deal with the emotional impact of dementia, but also how to pay for their loved one’s long-term care.

“It’s a challenge for almost every family that we see. We do see folks who are lucky and have considerable resources. But even for those families it’s a major financial obligation.”

He went on to say it was not realistic to expect every family to absorb the cost, predicting that society will need to eventually think of another way to fund care for seniors.

Has dementia’s financial costs taken a toll on your family? What tips do you have for other families during this time? Share them with us in the comments below.