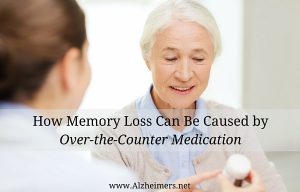 Some common medications, both over-the-counter and prescription, have a certain property that can contribute to memory loss and mild cognitive impairment. Learn more about these drugs, how they may accelerate cognitive decline, and what to do if you or a loved one is taking one of these drugs and experiencing memory loss.

Drugs that cause MCI and related memory loss have a property known as “anti-cholinergic,” that means the drugs slow the neurotransmitter acetylcholine which plays a large role in memory retention. However, very few drugs are labeled or classified as anti-cholinergic drugs.

Additionally, several studies have shown a higher rate of cognitive decline for people who regularly use anti-cholinergic drugs. In one specific study, a research team observed nuns and clergy from the Rush Religious Orders for an eight year period and concluded that those who used medications with anti-cholinergic properties experienced a faster rate of cognitive decline.

Dr. Jack Tsao, a researcher on the study and an associate professor of neurology at Uniformed Services University, addressed the American Academy of Neurology stating:

Physicians caution that people who have been prescribed medications that may have memory loss properties should not stop taking their prescriptions until they see their doctor and can discuss their concerns with someone who knows their medical history and needs.

It is important that caregivers and family members be aware of all ingredients in medications that senior loved ones may be taking, to take note of their side effects and any potential interaction issues. Here is a list of some of the commonly used medications that contain anti-cholinergic properties, which may be contributing to memory loss:

For more information about the connection between memory loss and over-the-counter medication, you can read Leo Galland, M.D.’s, medical and educational blog on brain health.

A new study has linked the use of over-the-counter medication to an increased risk of Alzheimer’s. The study, completed by a team of researchers from the Indiana University School of Medicine, found that a certain class of drugs known as anti-cholinergenics, which includes some anti-depressants, hayfever drugs, incontinence treatments and sleeping pills can actually reduce brain size.

The study included over 450 senior participants and used brain-imaging techniques and cognitive tests to evaluate the effects of medication on brain size. They noted that participants who were taking at least one medication with an anticholinergenic agent had remarkably reduced brain volume and larger cavities inside the brain.

First author of the paper and assistant professor of radiology and imaging sciences at the university, Dr. Shannon Risacher, is encouraged by the study, saying, “These findings provide us with a much better understanding of how this class of drugs may act upon the brain in ways that might raise the risk of cognitive impairment and dementia. Given all the research evidence, physicians might want to consider alternatives to anticholinergic medications if available when working with their older patients.”

The study concluded that this class of medication is linked to an increase in brain atrophy as well as dysfunction and clinical decline and recommends that the use of anti-cholinergic medication in seniors should be discouraged if another option is available.

The Head of Research at Alzheimer’s Society, Dr. James Pickett, warns against cutting out an entire class of drugs, however, saying:

“Concerns over the use of this common class of medicines have been raised before, with some research suggesting a possible link between anticholinergic drugs and an increased risk of dementia. This small study takes a closer look at changes in the structure and activity of the brain. However, the full impact of these drugs remains unclear as the people taking them in this study were more likely to have insomnia, anxiety, or depression, all of which are risk factors for dementia. We need to understand more about the possible effects of this type of drug, and we encourage doctors and pharmacists to be aware of this potential link. Anyone concerned about this should speak to their GP before stopping any medications.”

Have you had any experience with memory loss being caused by over-the-counter medication? Share your stories with us in the comments below.