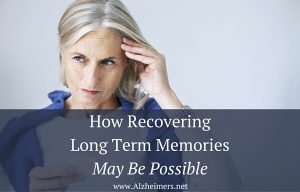 A study from the University of California Los Angeles (UCLA) has produced evidence that contradicts the common belief that memories are stored at the synapses of brain cells. Their findings suggest that recovering long term memories from Alzheimer’s disease or an event such as a concussion may be possible.

Learn more about this study and what it might mean for people living with Alzheimer’s.

Most neuroscientists believe that memories are stored in the connections of brain cells called synapses. They believe that when the synapses are destroyed, as happens in Alzheimer’s, memories are lost forever. A research team from UCLA recently concluded that this may not be the case. Their study was published in the journal eLife.

The team, led by David Glanzman, studied the long term memory of a small marine snail. They built new memories in the small snail by injecting serotonin which triggers and forms new connections in the brain. They trained the snails to be afraid of mild electrical shocks and then, after establishing a long term memory had been formed, they studied the neurons that controlled that reaction in a Petri dish. They then wiped out the new synapse with a protein blocker which, according to current theory, should have wiped out the new memory.

However, it did not and the snails were still afraid of shock which suggests the long term memory is stored somewhere else.

More recent studies support the theory that memories lost due to Alzheimer’s can be recovered. The newest study to suggest the recovery of lost memories involved mice with early stages of the disease. Researcher found they could reverse memory loss if the correct set of neurons was activated.

The study, recently published in Nature, placed mice in a container where they were exposed to a shock to their foot. When they felt the shock, they froze. The healthy mice remembered what was happening and froze when put in the same box the next day. The mice with early Alzheimer’s did not remember the shock and thus, did not freeze when placed in the same box the next day.

However, when researchers tagged engram cells (cells which encode a fear memory) with a light-sensitive protein an watched the brain cells of the mice with Alzheimer’s, they found that those mice actually showed fear. MIT graduate student, Dheeraj Roy, said:

“Directly activating the cells that we believe are holding the memory gets them to retrieve it. This suggests that it is indeed an access problem to the information, not that they’re unable to learn or store this memory.”

The conclusions of these studies could be groundbreaking for Alzheimer’s research, because Alzheimer’s is thought to only destroy synapses in the brain. Glanzman stated,

“As long as the neurons are still alive, the memory will still be there, which means you may be able to recover some of the lost memories in the early stages of Alzheimer’s.”

He does caution, however, that in later stages of the disease neurons actually die which would most likely inhibit the recovery of a memory.

The study is in its very early stages and it is important to note that while Aplasia does have similar neural molecular and cellular processes to humans they only have 20,000 neurons compared to the one trillion neurons found in the human brain. Nevertheless, the study does bring a glimmer of hope to the research community as well as the nearly 36 million people worldwide living with the disease.

What do you think? Are you hopeful that long term memories can be recovered in those with the disease? Share your thoughts with us in the comments below.