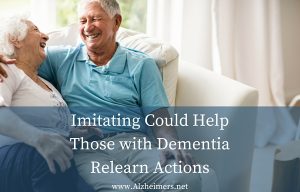 A recent study evaluated the effects of mimicry on people with Alzheimer’s disease and related dementias and found that imitating may be just as helpful to seniors living with Alzheimer’s as it is for babies and toddlers learning to speak.

Learn more about this study and its potential effects on future treatment methods.

How Imitating Could Help Those with Dementia

Mimicry is a basic foundation of learning for babies and toddlers and now a new study suggests it may also be beneficial for people living with mild Alzheimer’s.

The study, published in Frontiers in Aging Neuroscience, found that people with the disease may still have the ability to imitate movements and follow instructions. Just as children use mimicry to learn communication skills, people with Alzheimer’s may also benefit from mimicry, relearning voluntary functions by watching others.

Dr. Ambra Bisio is a postdoctoral researcher in the Department of Experimental Medicine at the University of Genoa and a lead researcher on the study. She said of the research:

“Alzheimer’s patients are still able to voluntarily imitate the movement of an object, as well as that of a human being. If this ability is still in place, a patient could relearn how to perform actions that have become difficult due to the disease.”

The Effects of Mimicking on Dementia Symptoms

The study involved 23 seniors between the ages of 75-86 with mild to moderate Alzheimer’s. Participants had displayed cognitive impairment but still had good vision, hearing and retained motor skills, allowing them to follow instructions and mimic behavior through the course of the study. The control group was composed of healthy seniors.

All participants were asked to watch a dot move at different speeds across a screen and then follow the pattern of the dot after it had finished moving. They were also asked to copy random vertical movements of a human trainer as they faced each other. The study found that people with mild cases of Alzheimer’s disease were able to still follow instructions and mimic movement.

Researchers also noted that while mimicking a computer was possible, it was more effective with a human trainer. This could be due to the emotional and social benefits that come from interacting with another human.

This finding led Bisio to state that, “Because Alzheimer’s damages the parts of the brain that link motor and cognitive function, behavioral treatments will still be important for patients, even after pharmaceutical treatments are discovered.”

Have you found that imitating has helped your parent or a senior loved one with dementia relearn actions? Share your thoughts and stories with us in the comments below.