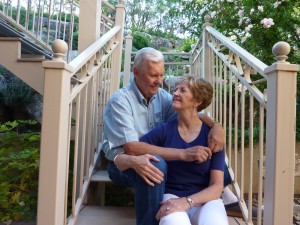 In April 2013, Vern Gillmore was diagnosed with early-stage Alzheimer’s disease. When Vern first started to experience the warning signs, he was not prepared to hear the words “Alzheimer’s disease.” Today Vern and his wife and care partner Karen are working together to educate others about the disease while facing their daily challenges head-on. They are just one couple whose story shows the power of love and teamwork during National Alzheimer’s Disease Awareness Month.

I have been athletic all my life. I couldn’t accept not having a healthy body. I’ve always prided myself on physical fitness and staying in good health, and suddenly I had anxiety and double vision and difficulty using familiar devices like the home computer.

I was a volunteer in disaster response, and when you work in those situations, you have to be able to make quick decisions. I volunteered during Hurricane Sandy in New York and realized when I returned home that I wasn’t as quick or alert as I should have been. I didn’t want to hurt people who were suffering by making a bad decision – that would have torn my heart out. I realized something was wrong with me. My mother and brother had Alzheimer’s, but I was in denial that the cause of my symptoms could be the same.

I have accepted that I have Alzheimer’s. I handle my frustrations by keeping busy. I love taking my dog outside, running her hard for an hour and see her enjoy the exercise as much as I do. Her happy wagging tail makes me happy.

At first I didn’t want to share my diagnosis with others.  I was embarrassed and ashamed. But then I realized that I didn’t do anything wrong to cause this diagnosis. Things have changed since my diagnosis. I now look forward to being able to talk openly about my Alzheimer’s. I now speak at churches, city centers and hospitals in my area because I know that many people are uninformed and that the general population needs to understand and learn more about Alzheimer’s disease.

My wife Karen is my care partner. She is observant and sharp. She doesn’t miss a beat.  She is why I was able to get back to what matters: I volunteer, participate in the Walk to End Alzheimer’s, and stay involved in whatever capacity I can.

Vern and I met through a newspaper advertisement in the San Francisco Chronicle during the ’90s. We were married for 20 years before the Alzheimer’s diagnosis.

I am the worrier in the family, vigilant 24/7. On a typical day, I manage our schedules and instill safe habits. Vern sets up his medications and I double-check them. I ask him the important questions before he goes out: do you have your wallet? Keys? Phone? GPS? We keep a list of phone numbers available should he become confused or need help when he goes out.

I have found the Alzheimer’s Association website alz.org to be a gold mine. It is simple – there is so much information on Alzheimer’s disease and it’s easy to read and understand. I chip away at the website, read books, and subscribe to neurology journals.

I think it is important for care partners and caregivers to know that it doesn’t make you a bad person when you experience frustrations. One of the biggest challenges I have come across is the changed communication style between Vern and I. It takes a lot of energy and never-ending patience to not take things he says or does personally.

When we went to a support group, it was the first time I didn’t feel all alone anymore. Everything I had been thinking and feeling was validated. Other people were experiencing the same emotions I was. I talked to people who were at the same place I was as a care partner and it gave me a renewed sense of energy.

Vern has renewed energy as well; he is now very interested in educating people about the disease as an Alzheimer’s Association National Early-Stage Advisor. He never really had a hobby other than running, and volunteering; but he has one now. His hobby remains volunteering, but he has added talking about Alzheimer’s and educating the public about how this disease impacts individuals and families.

Vern and Karen’s story continues. And they are not alone.

In 2013, 15.5 million family and friends provided 17.7 billion hours of unpaid care to those with Alzheimer’s and other dementias – care valued at $220.2 billion. More than 60 percent of those Alzheimer’s and dementia caregivers and care partners are women. Karen is just one of millions who found resources that have helped her on her journey as a care partner.