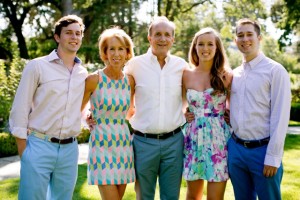 Nothing made Michaela (Mikey) Hoag of Atherton, California, feel more powerless than when her father, living more than 2,000 miles away on the East Coast, was diagnosed with Alzheimer’s disease. Unable to help with her dad’s daily care and unwilling to sit idle, she turned to her husband, Jay, and asked “What can we do?”

Mikey reached out to the Alzheimer’s Association with questions about the disease — and walked away with information, resources and much more. In the Association, she found a partner to help her develop and pursue her philanthropic vision to help solve the problem of Alzheimer’s.

In 2004, Mikey and Jay pledged their first $1 million gift to the Association’s research program, placing them as lifetime members of the Zenith Society, the Association’s highest and most involved level of philanthropy. But despite her increased support, which included attendance at Association fundraising events across the country, Mikey remained reluctant to speak out about her connection to the disease. It was after her father passed away in 2007 that she realized the power her story could have in bringing people together and rallying them around the Alzheimer’s cause.

“I didn’t know if people would respond if I spoke out,” Mikey said. “But I had two choices: I could ignore the problem or I could do something about it. And when my mother started to show the signs of the disease, I knew I had to kick it in gear. This couldn’t wait.”

Mikey decided that she could use her experience with Alzheimer’s to start an event in Silicon Valley, a hub for innovation and problem solving. Aided by a steering committee of dedicated women affected by the disease, her idea — an inspirational gala calling on community leaders, powerful business executives and celebrities to raise awareness and funds to fight the disease — began to take shape.

On May 5, 2012, the first Part the Cloud gala was held in Menlo Park, California. The event featured a live performance by American icon Tony Bennett and appearances by Bill Walton, Joan Baez, Mickey Hart, Terry Moran, Virginia Madsen and other well-known celebrities. It was an evening of music, dancing and storytelling that raised nearly $2 million to advance the research efforts of the Alzheimer’s Association. From there, the event continued to grow: In 2014, Part the Cloud raised over $4 million, making it the largest one-day fundraiser in the Association’s history.

The biennial gala alternates yearly with a luncheon of the same name, and together the two events have raised over $6 million to date, allowing the Association to support the work of some of the nation’s most prestigious scientists and universities. Awards from Part the Cloud focus on accelerating the transition of critical findings from the laboratory through trials and into possible therapies — filling the gap in Alzheimer’s drug development by providing essential support for early-phase clinical studies.

“Research is the only way to end this disease,” Mikey said. “I know that I can raise money, and I’m confident in the Association’s ability to invest the funds in the most meaningful ways.”

To accelerate research at an even faster pace, Mikey is encouraging corporations to match Part the Cloud’s grant funding. In 2014, Part the Cloud received 35 grant applications from promising researchers in North America but was only able to fund five. Mikey is confident that with the support of corporations, the number of projects they could fund would significantly increase.

Ref lecting on the past few years, Mikey is optimistic about the power of community and what can be achieved, especially with a strong network. She recently joined My Brain™, a movement that calls on 1 million women to use their amazing brains to wipe out Alzheimer’s disease.

“This wonderful philanthropic family has developed across the country,” Mikey said. “There are times when you’re exhausted and feel like you’re not making any headway, and then you meet strong women like Dagmar Dolby and Maria Shriver and you know others are fighting just as hard for the same cause. It keeps me going.”

Learn more about Part the Cloud at alz.org/galas.

Dagmar Dolby: Amplifying her voice as an Alzheimer’s Advocate