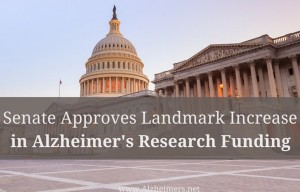 Alzheimer’s is one of the most deadly diseases in the United States that receives limited funding to put towards research efforts. However, the Senate Appropriations Committee recently passed a 60% increase in Alzheimer’s research funding, that, if passed into law, would be the largest increase in funding for the disease ever.

It’s no secret that Alzheimer’s is one of the most expensive diseases in the U.S. and that research efforts remain grossly underfunded. The cost of care for Alzheimer’s patients in the U.S. is estimated to reach $226 billion in 2015, with the global cost of care estimated to be close to $605 billion, equivalent to 1% of the entire world’s gross domestic product. Additionally, Medicare and Medicaid are expected to pay $154 billion this year for dementia care.

Alzheimer’s disease remains the only leading cause of death in the U.S. without any cure or way to prevent or slow its progression. Yet, Alzheimer’s receives only $586 million for research.

Experts estimate that nearly $2 billion annually is necessary to find a prevention or treatment by 2025, the goal of the National Plan to Address Alzheimer’s.

Closing the Gap in Alzheimer’s Funding

In an effort to close the funding gap and fulfill the goals and objectives of the National Plan to Address Alzheimer’s, the Senate Appropriations Committee passed a historic 60% increase for Alzheimer’s disease research funding, adding nearly $350 million to the cause. If the increase is passed into law, it will be the largest increase in Alzheimer’s research funding ever.

Harry Johns, President and CEO of the Alzheimer’s Association is encouraged by the potential increase in funding saying:

“With this bipartisan call for a 60% increase in Alzheimer’s disease funding, Appropriations Committee Chairman Thad Cochran (R-MS) and Ranking Member Barbara Mikulski (D-MD) and Subcommittee Chairman Blunt and Ranking Member Murray are making history. More importantly, they are demonstrating to the millions of Americans affected by this devastating and fatal disease that they will not suffer indefinitely.”

“As we look forward to the announcement of the first Alzheimer’s professional judgment budget next month, the momentum behind the fight to end Alzheimer’s has never been greater.”

What do you think about this landmark increase in Alzheimer’s research funding? Are we doing enough to hit our national goal of effectively treating and preventing Alzheimer’s by 2025? Share your thoughts with us in the comments below.