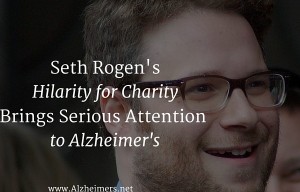 As Rogen watches his mother-in-law battle with the disease, he is raising funds and awareness through his organization “Hilarity for Charity.” Learn more about the organization and how it is bringing serious attention to Alzheimer’s.

Hilarity for Charity (HFC) is an organization led by Seth Rogen and his wife, Lauren Miller, to fight Alzheimer’s, the disease that plagues his mother in-law. Using his celebrity status and far reaching platform, Rogen and his team strive to raise Alzheimer’s awareness among the millennial generation.

The organization sponsors an annual event called the Los Angeles Variety Show and since the event began three years ago, HFC has raised over $1.7 million for Alzheimer’s. Past performers include Paul Rudd, Bruno Mars, Tenacious D, Patton Oswalt, Samuel L. Jackson and The Backstreet Boys, to name a few. This year’s event, James Franco’s Bar Mitzvah at the Fourth Annual Variety Show, will be held on October 17, 2015 and features Miley Cyrus.

Last year, HFC expanded their reach by launching HFC U to connect with universities and encourages college organizations to host their own HFC event. The organizations compete with each other and the top fundraiser earns a coveted prize. The most recent prize, awarded to Pi Kappa Alpha and Alpha Chi Omega at the University of Vermont, was a live commentary screening of Superbad with Seth Rogen and Chris Mintz-Plasse. The nationwide program has over 230 schools participating and has raised over $200,000.

There’s no question that Hilarity for Charity is making a financial impact in the fight against Alzheimer’s. However, it is arguably their impact on social awareness that is making the biggest contribution.

The money raised from HFC goes to care, support and raise awareness and research. Hilarity for Charity awards in-home care grants throughout the Unites States and Canada to allow more people to stay at home longer. As of 2015, HFC has given over 8,000 hours of respite care to Alzheimer’s and dementia caregivers.

Another goral is to “mobilize a new generation of Alzheimer’s advocates while supporting young people who are currently affected by the disease.” To do this, HFC provides support and awareness programs for people under 40 fighting Alzheimer’s. A main component of awareness has been the the release of a feature length film, “This is Alzheimer’s” which documents the stories of three different families navigating their way through the disease.

To learn more about HFC and to learn how you can become involved in their fundraising and awareness efforts visit: www.hilarityforcharity.org

Diet that mimics fasting may promote longevity and improve healthspan

New potential cause for Alzheimer’s: Arginine deprivation caused by overconsumption by immune cells
Alzheimer’s and Intimacy