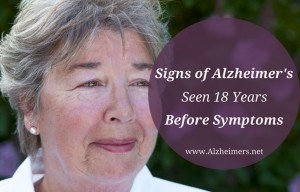 The results of a study from Rush University Medical Center in Chicago show that signs of cognitive impairment can be detected as early as 18 years before the disease is diagnosed.

Learn more about this study and what it means for early detection of dementia.

A research team led by associate professor of internal medicine at Rush University, Kumar Rajan, has found that early signs of cognitive impairment leading to Alzheimer’s may present themselves 18 years before symptoms occur.

Rajan and his colleagues observed over 2,000 seniors who did not have dementia over the span of 18 years. Every three years, the participants took a mental skills test and then analyzed the results over time. They found that those seniors who eventually developed Alzheimer’s has lower test scores throughout the 18 year period. In addition, their scores actually declined with each test.

Researchers concluded that for each unit their score dropped, the risk of developing Alzheimer’s increased by 85%.

For now, researchers believe their findings suggest that a cognitive test should be part of a regular assessment for people beginning in middle age. Catching Alzheimer’s early will give doctors more time to intervene and slow the progression of the disease.

Next, Rajan plans to study the effects of brain-stimulating activities on Alzheimer’s once it is diagnosed.

Do you think regular cognitive testing should be a part of standard medical care? Why or why not? Share your thoughts with us in the comments below.

Dagmar Dolby: Amplifying her voice as an Alzheimer’s Advocate
Scroll to top