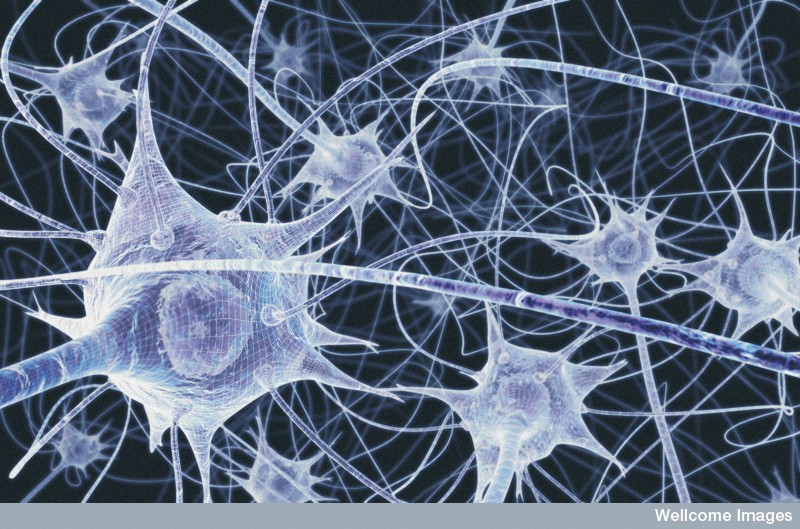 Nerve cells (neurons) in the brain – loss or damage can cause dementia. Alzheimer’s disease is the leading cause.

But as well as progressive brain cell death like that seen in Alzheimer’s disease, dementia can be caused by a head injury, a stroke or a brain tumor, among other causes.6

Some of the causes are simpler to understand in terms of how they affect the brain and lead to dementia:1

Some types of traumatic brain injury – particularly if repetitive, such as received by sports players – have been linked to certain dementias appearing later in life. Evidence is weak, however, that a single brain injury will raise the likelihood of having a degenerative dementia such as Alzheimer’s disease.7

Alzheimer’s dementia is caused by progressive brain cell death. Estimates range between 60% and 80% for the proportion of all cases of dementia being accounted for by Alzheimer’s disease.2 In the US, about 5.3 million people are thought to have the disorder among the estimated 6.8 million individuals who have some form of dementia.4

Alzheimer’s is thought to be caused by “plaques” between the dying cells in the brain and “tangles” within the cells (both are protein abnormalities: a build-up of “beta-amyloid” in plaques and the disintegration of “tau” protein in tangles).

These inclusions in the brain are always present with the disorder but whether they are themselves the cause, or if there is some other underlying process, is not known – and there is some overlap with other disorders that show similar changes in brain cells.1,9

The brain tissue in a person with Alzheimer’s has progressively fewer nerve cells and connections, and the total brain size shrinks.1,9

Dementia with Lewy bodies is also caused by neurodegeneration linked to abnormal structures in the brain. Here, the brain changes involve a protein called alpha-synuclein.10

Mixed dementia refers to a diagnosis of two or three types occurring together. A person may show both Alzheimer’s disease and vascular dementia at the same time. Or the combination could be Lewy bodies and Alzheimer’s. There can also be a combination of all three types.10

Parkinson’s disease is also marked by the presence of Lewy bodies. While the part of the brain affected means there are classic movement symptoms, people with Parkinson’s can also go on to develop dementia symptoms as the degenerative changes in the brain gradually spread.10

Huntington’s disease is similar to Parkinson’s in the respect of being classically marked by uncontrolled movements yet having dementia as a component. It results in mood changes, too. Huntington’s is an inherited condition caused by a single faulty gene. This can produce the disease at any age – as young at 2 years of age and as old as 80, but typically between the ages of 30 and 50 years.10

Other disorders leading to symptoms of dementia include:10

Recent developments on causes of dementia from MNT news

Link found between dementia and vitamin D deficiency – In what is regarded as the first large, population-based study of its kind, a team of researchers has found a link between vitamin D consumption and the risk of developing dementia. Older people who do not get enough vitamin D could double their risk of developing the condition.

Does poor sleep increase risk of dementia? – While sleep protects both physical and mental health, some people experience better sleep than others. Now, new research has associated poor sleep with an increased risk of dementia as a result of changes that occur within the brain.

Memory loss in dementia can be serious enough for the person to forget where they are, even on their home street.

The symptoms of dementia experienced by patients, or noticed by people close to them, are exactly the same signs that healthcare professionals look for. Therefore, detailed information on these is given in the next section about tests and diagnosis.

A person with dementia may show any of the following problems, mostly due to memory loss – some of which they may notice (or become frustrated with) themselves, while others may only be picked up by carers or healthcare workers as a cause for concern. The signs used to compile this list are published by the American Academy of Family Physicians (AAFP) in the journal American Family Physician:6

The Alzheimer’s Association has put together Know the 10 signs – a PDF document listing real-life examples of how this type of dementia can affect people.

Diet that mimics fasting may promote longevity and improve healthspan

What is dementia? The signs, symptoms and causes of dementia
Scroll to top