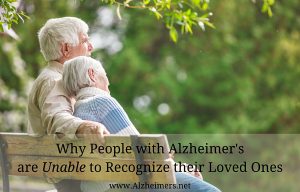 As Alzheimer’s disease and related forms of dementia advance, the ability to recognize the faces of loved ones diminishes. As it does, family relationships often diminish as well and many people with Alzheimer’s become isolated and lonely.

A new study sheds more light on why facial recognition is impaired in Alzheimer’s, bringing new understanding to the disease.

As Alzheimer’s progresses, facial recognition and memories fade. When people with Alzheimer’s can no longer remember the faces of their loves ones, it can bring emotional hurt and turmoil, causing families to distance themselves.

A new study published in the Journal of Alzheimer’s Disease and led by Dr. Sven Joubert, PhD, a researcher at the Centre de Recherche de l’Institut Universitaire de Gériatrie de Montréal, and a professor with the Department of Psychology at Université de Montréal, looked into why people with Alzheimer’s were no longer able to recognize the faces of their loved ones.

For the study, researchers recruited people with Alzheimer’s as well as people in good health, and analyzed their ability to perceive cars and faces in photos that were either upside down or right side up. Dr. Joubert summarized the team’s findings stating:

“The results for people with Alzheimer’s were similar to those in the control group in terms of answer accuracy and the time to process the upside-down faces and cars. To perform these tasks, the brain must perform a local analysis of the various image components perceived by the eye. However, with the upright faces, people with Alzheimer’s were much slower and made more mistakes than the healthy individuals. This leads us to believe that holistic face recognition in particular becomes impaired. Subjects with Alzheimer’s disease also demonstrated normal recognition of the upright cars, a task that in theory does not require holistic processing. This suggests that Alzheimer’s leads to visual perception problems specifically with faces.”

It is important to note that holistic perception impairment is noticeable in the early stages of the disease.

How These Findings Could Encourage Family Members

A recent survey conducted by the Alzheimer’s Association found that over 40% of respondents said it was “pointless” to stay in contact with a loved one after they are unable to recognize the faces of family and friends. Alzheimer’s advocates caution against this way of thinking and boast the many benefits that come from visiting with people who have advanced dementia.

Researchers from the latest study to investigate the lack of facial recognition in people with Alzheimer’s hope that their study helps family members better understand what is happening to their loved one.

They also hope that their findings will encourage families to look for new ways to delay the impairment of holistic perception and inspire new treatment methods.

Did you know that people with Alzheimer’s are unable to recognize their loved ones as the disease progresses? Have you experienced this among your family or loved ones? Share your thoughts and stories with us in the comments below.