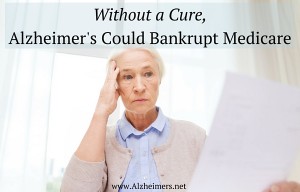 While Alzheimer’s research has come so far in a few short years, there is still a long way to go. With studies focused on finding potential disease prevention methods and discovering new links to Alzheimer’s, researchers are hopeful that a treatment is on the horizon. Yet, the disease remains to be a leading cause of death with no treatment and no cure.

A Closer Look at How Alzheimer’s Could Bankrupt Medicare

While researchers are hopeful that 2016 will bring further advancements in Alzheimer’s research, the current Alzheimer’s stats are tragic, both emotionally and financially devastating.

The latest statistics surrounding the economics of the disease give a glimpse into the catastrophic nature of the Alzheimer’s:

The cost of caring for someone with Alzheimer’s is much higher than someone who is fighting cancer or heart disease, other top causes of death in the U.S. This is because much of the care required at the end of a person’s life with Alzheimer’s is assistance with activities of daily living (i.e. bathing, dressing, eating, grooming) and that kind of care is not covered by insurance.

As the disease progresses and care costs continue to grow, Alzheimer’s could bankrupt Medicare, as it covers about half of the direct costs of caring for people with the disease.

Director of the Memory and Aging Center at the University of California, San Francisco, Dr. Bruce Miller, states:

“This is clearly the underfunded and understudied problem of the 21st century. We’ve made a lot of progress in therapies around heart disease, cancer and stroke, and we need to move faster in Alzheimer’s research. If we can’t find better therapies for an aging brain, as a society we will dramatically suffer.”

Current research methods are focused on preventing or stopping the progression of Alzheimer’s before symptoms occur. Slowing or delaying the onset of Alzheimer’s by just five years would decrease Medicare spending by 50% and bring new, refreshing hope to a weary population of caregivers.

What do you think can or should be done to wage a war on Alzheimer’s disease? Share your suggestions with us in the comments below.

Caring for Aging Parents: You’re Not Alone
Scroll to top